Our very own Mike O’Rourke is treading the boards and staring as Simon Bliss in Hay Fever, by Noel Coward.

The Ringmer Dramatic Society are excited to be performing Hay Fever, directed by Ruth Whitlock.

This comic masterpiece is one of Noel Cowards most durable comedies. 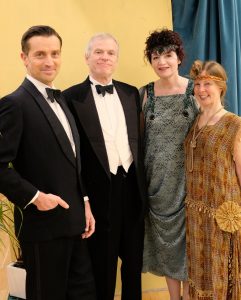 The action takes place in the house of the Bliss Family over the course of a weekend. Judith Bliss a retired actress, her husband David, and their two grown up children, Simon and Sorel, have all privately invited guests for the weekend, unbeknown to any one else. As the guests arrive, it becomes clear that it is not them who will be the problem,  but the family themselves.

Although Judith has supposedly retired from the stage, the nightmare weekend becomes her own private play, and her family become the supporting actors. Over the top and theatrical in their actions, the Bliss family delight in winding each other up and provoking a dramatic reaction from each other. As the weekend wears on, each guest pairs off with the wrong person with dramatic effects. Confused and angered by the strange behaviour of the their hosts, the guests all agree that they must leave straight away. Creeping out of the house, they are unnoticed by the Bliss family who are, once again, engaged in a daft, passionate argument about David’s book.

Although it is not packed with as many witty one liners as many of Coward’s plays are, Hay Fever provides a shrewd, farcical look at a dysfunctional family oblivious to their ill-mannered behavior.

Fancy a night out?